I was very saddened to learn of the passing of Dr Benjamin Kipkorir on 20 May 2015. Born in 1940 in Kapsowar, Elgeyo-Marakwet District in Kenya, Ben was the pre-eminent Marakwet intellectual. Through his work on the Marakwet, he made an enormous contribution to the history and anthropology of Kenya, championing oral historical techniques as well as ‘ethnography of the self’ in the days before postcolonial reflexivity had become established. Ben’s support and astute critique has been present from the very beginning of my academic career, when I arrived in Kenya as a PhD student. In fact, in 1981 he convened the conference at the University of Nairobi where I gave the very first paper on my Marakwet research, and his edited collection The Kerio Valley contained my first publication. It’s hard to believe that his kindly, wise, critical voice will no longer be heard Read more
Posted by CheranganyDescent at 10:12 PM No comments:

When I learnt on Wednesday, May 20, that Dr Kipkorir had passed on, I could not help but remember the singular raconteur, who told his story earnestly and genuinely, though some critics have said “the English is difficult in some places”. Dr Kipkorir led several lives (some claim he was sometimes controversial but I only knew him as a great writer), any one of which could have provided ample fodder for unforgettable memoirs. Read more
Posted by CheranganyDescent at 10:11 PM No comments:

Before Dr. Kipkorir moved from active academic life and to enter the private sector, he served on several panels and bodies, notably the Armed Forces Pay and Allowance Review Board and the Presidential Working Party on the Second University. Development Bank. Dr. Kipkorir has a record of many publications including The Marakwet of Kenya which was published in 1973. He was the Treasurer of The Kenya National Academy of Sciences. Read more
Posted by CheranganyDescent at 10:09 PM No comments:

Kenya’s second largest daily newspaper, the Standard has serialized several chapters of Descent from Cherang’any Hills - Memoirs of a Reluctant Academic, in the month of June 2010. some of the chapters picked by the standard include:

1. Intrigues behind devolution, and executive powers

One of the areas in which local authorities had been savaged by critics, including the Provincial Administration, was the poor collection of GPT – the tax which, in the last days of British rule, had been devised as the chief means of financing local government. It replaced most of the other sources of revenue, e.g. agricultural produce cesses, court fees, royalties from Trust Land forests and most important of all, poll tax, which had been paid by every able-bodied male. Under the new revenue scheme Councils could also levy rates on land but we argued that reliance on this tax alone was not a feasible proposition, as not all land in the County area was held by title.

We should have been reading the subtext of what was intended with the abolition of the Majimbo Constitution by, in particular, trying to make sense of the political statements and declarations of the President and his close associates. One weekend, when addressing a rally at the Kamukunji Grounds in Nairobi, Kenyatta, had, it seemed in response to the popular demand of the crowd, declared that outpatient services in government health centres would 'with immediate effect' be offered free of charge to wananchi.

The following week, he extended the provision of this 'free' service to local authority clinics, without providing the additional money to cover the costs of personnel, premises and drugs. Next, he halved the lowest GPT [Graduated Personal Tax) tax to Sh24 but a short while later abolished it altogether! The Ministry of Local Government was requested to provide local authorities with additional grants to cover the shortfalls arising from the additional burden that free health services entailed against a curtailed tax base; but it would be quite a while before any monies were received, and they were certainly not sufficient to cover the shortfall.

While at Makerere we celebrated Tanganyika’s Independence on December 9th 1961, Uganda’s in October 9, 1962 and Kenya’s on December 12, 1963. Developments associated with national independence had but the slightest effect on Makerere students’ consciousness of being members of one large East African family. Indeed, one of the political aspirations, strongly supported by many Makerereans, was that a federation of all East African States would be formed before each country attained Independence.

It was believed that the Tanganyikan leader, Mwalimu Julius Nyerere, deliberately delayed his country’s independence day in the hope that this dream might be attained and that one of Africa’s iconic leaders, Jomo Kenyatta, might become the proposed federation’s first head of state. But it was not to be.

The final stages of independence processes for both Kenya and Uganda were characterised by a great deal of turbulence and uncertainties and the result was that Nyerere could no longer delay his country’s Independence date. No sooner had Uganda become Independent than she became mired in a complex set of ideological and ethnic problems compounded by the authoritarian tendencies.

3. Rush for Kenya land (is) genesis of historical injustices

And while we were at it, trouble was brewing in the Rift Valley Province by way of departing European settlers from the White Highlands. Indeed, the first few years of Independence were a period of great social and economic change in those properties. The Government had acquired some of the outlying settler farms for settlement schemes under the arrangement reached with the British Government. Simultaneously, under a willing seller/buyer basis, former European settlers unwilling to live or uncertain of their future under an African Government had sold their farms to African farmers. But there were major consequences arising from this arrangement. There was an exodus of the best African farmers from the ‘Native Reserves’ especially from Nandi and Keiyo-Marakwet districts.

Contrary to expectations, the euphoria of acquiring former settlers’ farms was not immediately rewarding. Reduced agricultural productivity with corresponding poor returns for the new farmers was evident because few of them had the necessary experience and resources to manage large-scale farming.

The first teaching I undertook at the department was to give first year students introductory lectures on the ‘History of Kenya’. Seven years of independence was perhaps too soon to seriously reflect on nation-making but long enough to attempt it. In my approach, I considered it important to define Kenya historically before proceeding further and I would start: "Kenya is a function of the British colonisation." This shocked most of the students, much to my amusement because contemporary political rhetoric churned out by politicians went like this: "We did not get our uhuru on a silver platter; sisi tulijinyakulia uhuru wetu (we grabbed our Independence)!"

5. How politics led Luo Nyanza into poverty and neglect

During the early 1980s, Luo Nyanza was poor not because her people are lazy or frivolous. In my evaluation that was informed by my experience in the banking sector and other interactive activities, the toughest workers in this economy come from this region. The area was in want not because it lacked indigenous professionals who are qualified in relevant fields. Indeed, on a per capita basis, few regions could then equal the Luo in educational and professional attainments. Nyanza was impoverished because of politics, pure and simple!

In his abridged version of the book, Descent from Cherang’any Hills: Memoirs of a Reluctant Academic, Ambassador Benjamin Kipkorir details the origins and intrigues of local government in Kenya. Calling it Sirikwa County, the chapter details the centralisation of power, and the consequences of such policies read more
Posted by CheranganyDescent at 11:27 PM No comments:

After social upheaval, clubs and small publishers have sprung up in the East African nation as new outlets for literary expression. 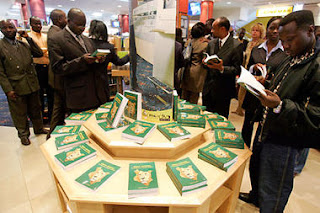 Kenyans have long been writing and, of course, telling stories. What’s new is the relative strength of the interest in domestic books. “They’re bestsellers,” says book salesman Protus Ikutwa of the Kwani? books that occupy a few shelves at Prestige bookstore in downtown Nairobi, next to volumes about Nelson Mandela and Barack Obama. Mr. Ikutwa says the store was selling five copies a day. more..

Posted by CheranganyDescent at 4:38 AM No comments:

Memoirs: Are Kenyans opening up to scrutiny?

Literature enthusiasts will best remember 2009 as a ‘good’ year. It was the year some prominent and unknown personalities penned their stories in an attempt to give Kenyans a glimpse into their lives and capture historical events that have shaped this country.

Among notable autobiographies published include, Njenga Karume’s Beyond Expectations: from Charcoal to Gold, Ndingi Mwana-a-Nzeki’s, A Voice Unstilled and Dr Ben Kipkorir’s Descent from Cherang’any Hills: Memoirs of a Reluctant Academic, former Kenya National Union of Teachers secretary general and Francis Ng’ang’a, Battles and Triumphs among others more ...

Posted by CheranganyDescent at 4:34 AM No comments: